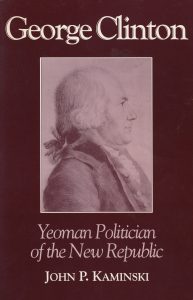 From the back cover—From an upstart Ulster County militia officer to “Pharaoh of New York” and vice president under both Jefferson and Madison, George Clinton cast a political shadow over the young republic for almost forty years. As outspoken supporter of the patriot cause, antifederalism, and later of Republican politics, he dominated the imbroglio of New York politics until his death in 1812.

The first biography of this pivotal figure in over half a century, George Clinton analyzes the public career of this leader who, because of the destruction of his papers, has remained largely lost to history.

In addition to exploring the complexities of Clinton’s life, Kaminski clarifies the often arcane issues of Confederation politics. His mastery of detail, his broad knowledge of the period, and his sensitivity to the subtleties of politics on state and national levels enable him to redefine Clinton and his age. George Clinton describes how politics worked from county to Congress and how Clinton worked from behind the scenes to dominate New York. In a revelatory new interpretation, Kaminski describes how Clinton, the leading Antifederalist in the country, allowed the New York State Convention to ratify the Constitution in pursuit of his ambition to become Washington’s first vice president and ultimately, his successor.

With this book Clinton is given his rightful place in American historiography alongside Patrick Henry, Alexander Hamilton, and Samuel Adams. 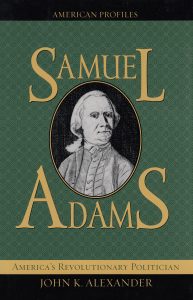 From the dust jacket—Samuel Adams: America’s Revolutionary Politician offers a fresh, full-life biography of the man Thomas Jefferson once described as the helmsman of the American Revolution. In this study, historian John K. Alexander uses narrative history to argue that Samuel Adams was both America’s first professional politician and its first modern politician. Adams, Alexander argues, was an unwavering politician who strove to protect the people’s basic rights and who emphasized the importance of virtue, liberty, a sense of duty, and education in fashioning a republican society. Alexander’s fresh reading of Adams’s record and a uniquely close look into his personal life uncover a masterful politician and a man consistent in his beliefs. 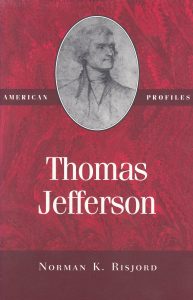 From the dust jacket—Perhaps the most hotly debated character in American history, Thomas Jefferson stands as an enigma representing different and often contradictory ideas. That one man, for example, could author the Declaration of Independence and simultaneously own slaves or that he could recoil at the expansion of the federal government but later double the size of the country in a pen stroke has caused historians to question the true meaning of Jefferson’s contribution to America’s founding.
This brief sketch of Jefferson answers many of the apparent contradictions of his fruitful life. Specifically, the author finds continuity in Jefferson’s evolving philosophy of political economy. Because Jefferson was not a man intellectually tied to any single ideology, he was fully capable of embracing competing “persuasions” that seem to us today incompatible. The author shows how Jefferson’s rhetoric was more a matter of time and circumstance than an element of absolute belief and demonstrates that Jefferson was not only a facile thinker but also a consummate politician.