The Founders’ Visions for America series explores the perspectives of American leaders who lived through, in Thomas Paine’s unforgettable words, “the times that try men’s souls.” The documents included in this series reflect the Founders’ views of the critical issues of their generation, including:

The Founders’ distinct visions for the future reflect the unique uses that were made of a common set of traditions and ideals in currency at the time. These traditions and ideals, including the creative ways in which the Founders drew on them, should encourage Americans of this generation—and every generation—to return to the sources of their freedoms, to study the Founders critically, their successes and shortcomings alike, and to find in them co-workers in the further expansion of liberty.

John Jay and the American Experiment:
Union, Justice, and Prosperity 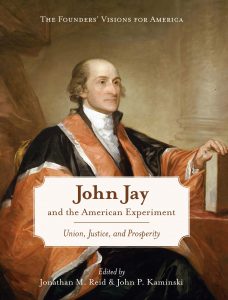 Edited by Jonathan M. Reid and John P. Kaminski
Published by the Center for the Study of the American Constitution
Softcover; 62 pages
5 x 7 inches

In the three documents printed here—Charge to the Grand Jury of the Supreme Court of New York, 9 September 1777; The Federalist No. II, New York Independent Journal, 31 October 1787; Charge to the Grand Juries on the Eastern Circuit of the United States, April–May 1790—Jay presents his vision for America, moving from war under a new state constitution and the Articles of Confederation to peace and greater security under a reconceived federal Constitution.

George Washington and the American Experiment:
Unity, Opportunity, and Sacrifice

Edited by Jonathan M. Reid, John P. Kaminski, and Thomas H. Linley
Published by the Center for the Study of the American Constitution
Softcover 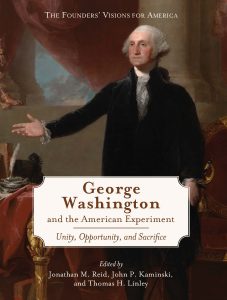 The four documents printed here—Last Circular Letter to the States, 8 June 1783; George Washington, President of the Constitutional Convention, to the President of Congress, 17 September 1787; First Inaugural Address, 30 April 1789; Farewell Address, 19 September 1796—are among the most important of Washington’s public legacy, and shed significant light on his perennial concerns for the nation that he and others of the Revolutionary generation struggled to forge by word and deed. In these documents, Washington bestows upon the American people a gift of confidence and hope—confidence in the principles of the Revolution and the fruits of constitution-making and hope that his own generation and successive ones would not forget the cost of their liberty and the risks of not guarding and nurturing it.