Adams and Jefferson: Contrasting Aspirations and Anxieties from the Founding 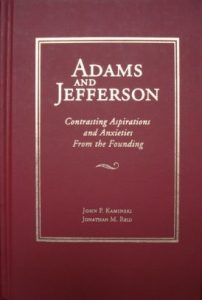 By John P. Kaminski and Jonathan M. Reid
Published by the Center for the Study of the American Constitution (2013)
325 pages
6 x 9 inches

For fifty years America was profoundly transformed by the writings of John Adams and Thomas Jefferson. Friends, and then opponents, estranged and then re-united in their correspondence, the two statesmen—one from New England, the other from Virginia—agreed on much but disagreed as often. This book examines their attitudes on forty important subjects such as war and peace, immigration, and the hereafter. Each of the forty topics begins with an illuminating introduction.

An Assembly of Demigods: Word Portraits of the Delegates to the Constitutional Convention by Their Contemporaries

By John P. Kaminski and Timothy D. Moore
Published by the Center for the Study of the American Constitution (2012) 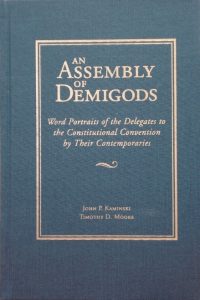 The efforts of many figured into the creation and ratification of the Constitution. This in and of itself leads many to conclude that this American Constitutional Moment was exceptional. In fact Thomas Jefferson, while in Paris, writing to John Adams then in London, noted that the Convention was “an assembly of demigods.” Franklin upon surveying the roster of delegates concluded they should be deemed “an assembly of notables.”
In the tradition of thinking about the Founding and the Founders as people with personalities, we offer this present collection. Previously John P. Kaminski has offered a volume that was a collection of word portraits of thirty Founders as seen by their contemporaries. That work as well as this present effort is an attempt to provide insights into the lives of the individuals that played a wide array of roles in the Founding Period. Kaminski’s treatment in The Founders on the Founders featured figures from a more expansive period of time broadly designated as the Revolutionary Period. This work hones in on the fifty-five delegates at the Philadelphia Convention. As you will see in this volume as well as Kaminski’s previous volume, the Founders were a lively, insightful, prickly bunch.

Metaphorically Speaking: The U.S. Constitution Described in Metaphors and Similes, 1787-1791

Metaphors, similes, and analogies can be powerful rhetorical devices. During the debate over ratifying the Constitution both Federalists and Antifederalists repeatedly used metaphors and similes in their letters, essays, and speeches. Hyperbole was common. More than 700 of these devices have been compiled in this volume. Antifederalists referred to the Constitution as “an iron trap,” “a gilded pill,” “a Many-Headed Leviathan,” and “a Monster with open mouth and monstrous teeth ready to devour all before it”; while Federalists referred to the Constitution as the “Magna Carta of American liberty,” “the New Roof,” a “chef d’œuvre in politics,” and a “sacred temple of freedom.” A few newspaper printers even used woodcuts to illustrate metaphors such as federal pillars, arches, domes, and a federal chariot. All of the metaphors compiled in this volume have been culled from the Documentary History of the Ratification of the Constitution.

A Great and Good Man: George Washington in the Eyes of His Contemporaries 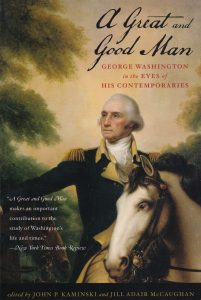 From the back cover—A Great and Good Man presents a lively collection of contemporary letters, poems, addresses, and newspaper reports that demonstrate the remarkable esteem in which Washington was held. Washington would become, after his death, a true symbol of the American republic.
This book illuminates the role that Washington played in the public imagination. We see Washington as he stood before and was addressed by the nation—praised by politicians, advised by foreigners, and lionized by citizens. In Washington’s own letters and addresses we also glimpse the canny side of Washington, a man who was careful with his public image and was a shrewd gamesman in the political arena. By the time he took presidential office in 1789, few questioned his political acumen and national leaders were dependent on his leadership.

Citizen Hamilton: The Wit & Wisdom of an American Founder 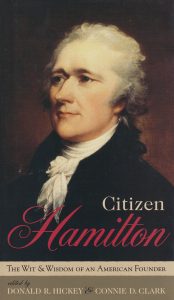 From the dust jacket—A man of extraordinary talent and boundless energy, Alexander Hamilton left a remarkable legacy in America’s history. A member of George Washington’s staff during the American Revolution, a delegate to the Constitutional Convention, an author of the Federalist Papers, and the nation’s first secretary of the treasury, he played a seminal role in the nation’s founding.
In this elegant collection, Donald R. Hickey and Connie D. Clark bring together enlightening, important, and amusing selections from Hamilton’s speeches, published writings, and personal letters. As we come to understand Hamilton’s thoughts on subjects as diverse as the Constitution, love, war, liberty, and honor, we find that his words are often as applicable in our own time as they were in his. 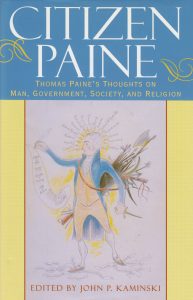 From the dust jacket—Thomas Paine was the quintessential revolutionary. No other person captured so well the explosiveness of the last quarter of the eighteenth century. In 1805 John Adams, long a critic of Paine, condemned the labeling of the era as the Age of Reason―the title of Paine’s last major work. Admitting that no other “man in the world has had more influence on its inhabitants or affairs for the last thirty years than Tom Paine,” Adams satirically suggested that this revolutionary era be called “the Age of Paine.”
Paine was a complex man. Each of his fifty biographers since his death in 1809 has failed to unveil the full person. Because he will always be different things to different people, it is unlikely we shall ever fully understand this enigmatic man. Joel Barlow, one of Paine’s closest friends, was perhaps right when he wrote that Paine’s “own writings are his best life.”
Taking Barlow’s advice, this compilation of over 1,000 quotations on 450 topics draws exclusively from the genius of Tom Paine. Accompanied by a brief but insightful biography, this unique volume expands our understanding and appreciation of this remarkable revolutionary, whose vision of a democratic society shaped a philosophy for his time that still speaks to us today.

Jefferson in Love: The Love Letters Between Thomas Jefferson and Maria Cosway 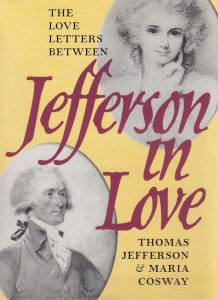 From the dust jacket—In 1784, the newly widowed Thomas Jefferson set sail for Paris. As America’s new minister to France he was expected to deal with the politicians and intrigue at the court of King Louis XVI, but he was not prepared for the likes of Maria Cosway.
Enchantingly beautiful, sophisticated, and talented, this Italian-born woman captured the handsome Virginian’s heart. Maria was his equal in many ways—she was an accomplished portrait and landscape painter, a harpist, singer, and composer. Their romance—lasting more than three years—is recorded in these private billets-doux between the shy American minister and his precocious bonne femme.
Presented here in an accessible edition by Jefferson-scholar John P. Kaminski are over forty romantic letters between Thomas and Maria. What they say about the innermost Jefferson as he pours out his heart in the midst of pre–Revolutionary France is remarkably revealing.

The Founders on the Founders: Word Portraits from the American Revolutionary Era

Edited by John P. Kaminski
Published by the University of Virginia Press, 2008 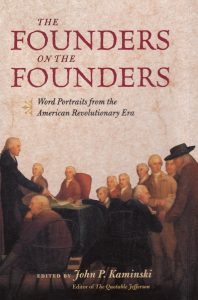 From the dust jacket—More than two centuries after the groundbreaking events of the American struggle for independence, its key figures strike us more as players in a myth than as people who lived, worked, and interacted with one another. To recover the human dimension of the founders, we need look no further than their own words. Through a series of revealing quotations, historian John P. Kaminski profiles thirty of the era’s best-known individuals, including Benjamin Franklin, John Jay, Alexander Hamilton, John Hancock, Thomas Paine, and Patrick Henry (“all tongue without either head or heart,” according to Thomas Jefferson), as well as the early presidents and their first ladies. The discourse is unfailingly respectful, and yet this is no mutual admiration society. The subjects are not afraid to be sharp about one another, but this only makes their words of praise more convincing and poignant.
Beginning with an introductory essay that provides an overview of the relationships between the founders, the book then presents each individual, providing a biographical sketch and a chronologically arranged series of quotations, clarifying not only each person’s place within the independence movement but the contours of their character. The authors strike us with their candor, their insight, and their eloquence as they make their subjects come alive for us. As this book reveals, greatness is not only a matter of responding to the times; the people themselves were remarkable. 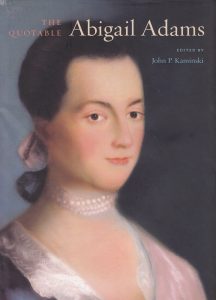 From the dust jacket—John Adams wrote to his wife Abigail that her letters “give me more entertainment than all the speeches I hear. There is more good Thoughts, fine strokes and Mother Wit in them than I hear in the whole Week. An Ounce of Mother Wit is worth a Pound of Clergy.” The Quotable Abigail Adams invites you to enjoy Abigail Adams’s wit and wisdom on a wide range of subjects, drawn from writings throughout her lifetime. Abigail shared her penetrating and often humorous observations with correspondents ranging from friends and neighbors to family members to heads of state, offering lively opinions on human nature, politics, culture, and family life. Selected and arranged by topic, these quotations provide an entertaining introduction to the thought and character of America’s founding mother. They are accompanied by a biographical introduction, source notes, chronology, and a comprehensive index, making this book the primary resource for those meeting this remarkable woman for the first time as well as for her longtime admirers. 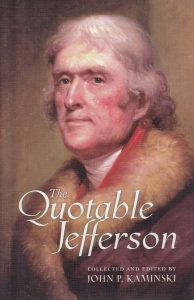 From the dust jacket—More than any other Founding Father, Thomas Jefferson made his reputation on the brilliance of his writing. John Adams chose the 33-year-old Jefferson to draft the Declaration of Independence largely because of his “masterly Pen.” The genius of the Declaration and Jefferson’s later writings amply confirmed Adams’s judgment. Few writers have said so much on so many subjects—and said it so well—as Jefferson. The Quotable Jefferson—the most comprehensive and authoritative book of Jefferson quotations ever published—demonstrates that as does no other book.
Drawing primarily on The Papers of Thomas Jefferson, published by Princeton University Press, John Kaminski has carefully collected and cleverly arranged Jefferson’s pronouncements on almost 500 subjects, ranging from the profound and public—the Constitution—to the personal and peculiar—cold water bathing.
The Quotable Jefferson is the first book to put Jefferson’s words in context with a substantial introduction, a chronology of Jefferson’s life, the source of each quotation, an appendix identifying Jefferson’s correspondents, and a comprehensive index. The main section of Jefferson quotations, which are arranged alphabetically by topic, is followed by three other fascinating sections of quotations: Jefferson on his contemporaries, his contemporaries on him, and Jefferson on himself.
This book will delight the casual reader and browser, but it is also a serious and carefully edited reference work. Whatever the subject, if Jefferson said something memorable about it, you are likely to find it here.