“This record is not only a national treasure, it is a world treasure.”—Gordon S. Wood

in The New Republic

“... the great work will always hold a high and honored place in the annals of American scholarship.”—Virginia Magazine of History and Biography

“These volumes will be used always as examples of the editor’s art.”—Georgia Historical Quarterly

“...a monument not to be bettered and one likely to be a landmark for all future excursions into the history of the ratification.”—N.C. Historical Review

“An unmatched treasure of materials ... it will inspire students and scholars for generations to come.”—William and Mary Quarterly

“... a monumental scholarly achievement and a gift to all Americans, now and in the future ...”—William and Mary Quarterly

The signing of the U.S. Constitution on 17 September 1787 was a milestone in creating a government for the recently independent United States. However, the act of signing itself did not create a government. Nor did it bring the new Constitution into force. The closing of the Constitutional Convention was the beginning of a long public debate during which citizens, represented in state ratifying conventions, read, debated, and ultimately voted to ratify the Constitution. The process of ratification produced an invaluable record of debates and commentaries that reveal how eighteenth-century Americans understood the Constitution and how they assessed its strengths and weaknesses. 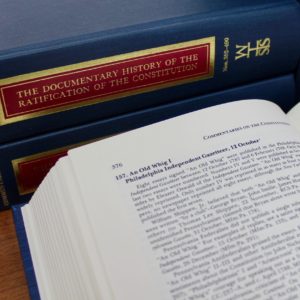 Beginning with the publication of the first volume of The Documentary History of the Ratification of the Constitution (DHRC) in 1976, DHRC editors at CSAC have been publishing the definitive collection of primary source material related to the ratification debates. Editors draw on a body of more than 70,000 documents, including official materials, such as records of town and county meetings, executive records, legislative proceedings, convention journals and debates, petitions, recommended amendments, forms of ratification, and financial records; personal papers, such as letters, memoirs, diaries, and poetry; diplomatic correspondence; and printed primary documents from newspapers, broadsides, and pamphlets. These documents have been transcribed, annotated, and published in thirty-four volumes to date.

DHRC volumes have been used extensively by historians and political scientists, cited by the Supreme Court of the United States and other federal courts, and increasingly adapted for use in classrooms at all educational levels. The volumes are essential reading for anyone wanting to understand the Constitution in historical context.

DHRC volumes are available at no cost through the University of Wisconsin Libraries’ Digital Collections. Digital volumes will be available two years after they are published in book form. Online access is also available by subscription through Rotunda, a digital publications collection at the University of Virginia Press. Bound volumes are available at most research libraries and can be purchased from the Wisconsin Historical Society or from our online bookstore.

The following is a complete list of DHRC volumes that you can browse on University of Wisconsin Libraries’ Digital Collections.

Vols. XIII–XVIII Commentaries on the Constitution: Public and Private (6 vols.)