Secrecy and the Constitutional Convention

By John P. Kaminski
Published by the Center for the Study of the American Constitution (Revised edition 2020)
24 pages
5.5 x 8.5 inches 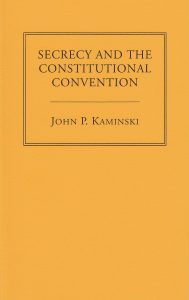 Soon after attaining a quorum in late May, Constitutional Convention delegates adopted parliamentary rules similar to those used by Congress. Among these was a rule of secrecy. Although this rule would become an important issue after the Convention adjourned, it was not particularly controversial while the Convention sat. The Confederation Congress, some of the state legislatures, and the British Parliament all regularly met in secret. Secrecy provided an environment conducive for full and honest discussions. An item appearing in the Pennsylvania Herald on 2 June 1787 expressed hope “that the privacy of their transactions will be an additional motive for dispatch, as the anxiety of the people must be necessarily increased, by every appearance of mystery in conducting this important business.” The Convention abrogated the rule of secrecy when it adjourned on 17 September 1787.
Antifederalists later denounced the rule of secrecy, casting a pall over the Convention and labeling it a cabal. “Centinel,” among the harshest critics of the Convention and the Constitution, supposed an “evil genius of darkness presided at its birth, it came forth under the veil of mystery, its true features being carefully concealed, and every deceptive art has been and is practising to have this spurious brat received as the genuine offspring of heaven-born liberty.”

The Bill of Rights and the States: The Colonial and Revolutionary Origins of American Liberties 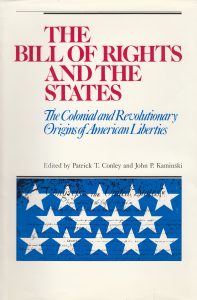 From the dust jacket—This book traces for the first time the foundation and development of individual liberty in each of the first fourteen states. Companion to the critically acclaimed The Constitution and the States: The Role of the Original Thirteen in Framing and Adoption of the Federal Constitution, this volume is a comparative history of the origins of civil rights and liberties in each of the colonies up to and including the struggle for and adoption of the Bill of Rights. It also includes an extensive authoritative bibliography of the origins of the Bill of Rights.

The Constitution and the States: The Role of the Original Thirteen in Framing and Adoption of the Federal Constitution 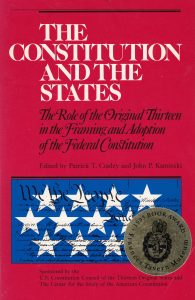 From the dust jacket—In thirteen deftly crafted essays—one on each state—noted historians provide a fascinating picture of the political process by which competing interests and ideas formed the Constitution. Includes an excellent thirty-five page annotated bibliography of the scholarship on the ratification of the Constitution.

The Constitution before the Judgment Seat: The Prehistory and Ratification of the American Constitution, 1787–1791 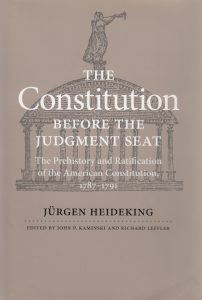 From the dust jacket—Originally published in German in 1988, the late Jürgen Heideking’s exhaustive study of the debates over the ratification of the U.S. Constitution examines the subject topically, analyzing the role of the media, the various methods used to call state ratifying conventions, and the festive culture in both the large cities and towns as well as the small communities. He also compares the convention elections, procedures, and debates from town meetings to private correspondence and the publication of convention debates.
In Heideking’s view, the construction of a new political process in which the people debated an issue of national importance was an unintended but key result of the struggle over the ratification of the federal Constitution. By concentrating on the reception of the document in the states, balancing external influences from abroad and from other states on the philosophical opinions of the ratifiers against a rising “nationalist” prescription about the republic’s needs, Heideking offers a thorough, insightful perspective on the Constitution’s ratification.
Heideking’s work anticipated diverse strands of subsequent scholarship; this translation, abridged, edited, and with a useful new introduction by the volume’s editors, provides not only an invaluable account of the ratification debates but also a master narrative for integrating future studies. 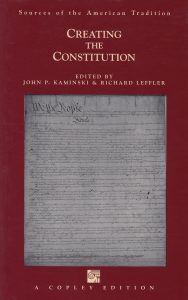 From the back cover—Creating the Constitution is a remarkable collection of original eighteenth-century letters and newspaper articles that were written during the debate over the ratification of the Constitution in 1787–1788. These pieces are introduced with brief descriptions and explanations that will help students use this volume. The volume also has a general introduction that explains the events leading up to the Constitutional Convention, the ideas of those who wrote the Constitution and then supported its ratification, and the arguments of those who opposed it. All documents have been carefully selected for readability and importance.

The Great Rights of Mankind: A History of the American Bill of Rights 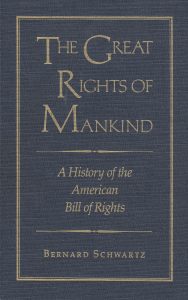 From the dust jacket—“The American Bill of Rights is . . . a magic mirror,” writes Bernard Schwartz, “wherein we see reflected not only our lives, but the whole pageant of Anglo-American constitutional development and all that those struggles have meant in the history of freedom.”
Perhaps the finest short history of the Bill of Rights ever written, this is an updated, expanded version of the classic. The author has added an afterword that brings the history of what Madison called “the great rights of mankind” through the Rehnquist court, making this an invaluable study.

The Selling of the Constitutional Convention: A History of News Coverage 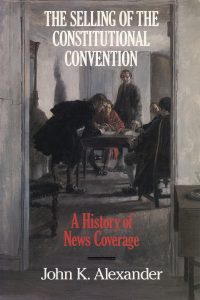 From the dust jacket—During the long summer of 1787, while half a hundred men deliberated in utmost secrecy over the fate of a nation, newspaper editors went to great length to win support for the federalist cause. By launching one of the greatest media marketing campaigns in American history, publishers repeatedly promoted the anticipated results of the Constitutional Convention while actively stifling its antifederal critics.
In this revealing exposé of media management in the eighteenth century, historian John K. Alexander demonstrates how publishers’ tacit political assumptions and their tightly woven information networks channeled public debate over the issue. He quantitatively and qualitatively shows how publishers turned their papers into propaganda instruments in an effort to create and solidify a popular consensus around the yet unknown results of the Convention. In the words of one New York editor, “they conceived it a duty incumbent on them to prepare the minds of their readers for [the Constitution’s] reception.”
“The evidence from 1787,” writes Alexander, “suggests that independent ownership and operation offer no guarantee of a truly free and informative press.” The Selling of the Constitutional Convention is a fascinating analysis of news management in the 1780s that sheds new light on the role of the press in early American political culture.