None of the titles in this series are currently available for purchase at our online bookstore. 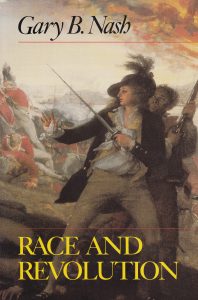 From the dust jacket—The most profound crisis of conscience for white Americans at the end of the eighteenth century became their most tragic failure. Race and Revolution is a trenchant study of the revolutionary generation’s early efforts to right the apparent contradiction of slavery and of their ultimate compromises that not only left the institution intact but provided it with the protection of a vastly strengthened government after 1788.
Reversing the conventional view that blames slavery on the South’s social and economic structures, Nash stresses the role of the northern states in the failure to abolish slavery. It was northern racism and hypocrisy as much as southern intransigence that buttressed “the peculiar institution.” Nash also shows how economic and cultural factors intertwined to result not in an apparently judicious decision of the new American nation but rather its most significant lost opportunity.
Race and Revolution describes the free black community’s response to this failure of the revolution’s promise, its vigorous and articulate pleas for justice, and the community’s successes in building its own African-American institutions within the hostile environment of early nineteenth-century America.
Included with the text of Race and Revolution are nineteen rare and crucial documents—letters, pamphlets, sermons, and speeches—which provide evidence for Nash’s controversial and persuasive claims. From the words of Anthony Benezet and Luther Martin to those of Absalom Jones and Caesar Sarter, readers may judge the historical record for themselves.
“In reality,” argues Nash, “the American Revolution represents the largest slave uprising in our history.” Race and Revolution is the compelling story of that failed quest for the promise of freedom. 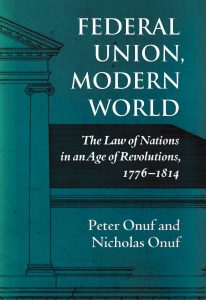 From the dusk jacket—In this thought-provoking analysis of international relations, the Onufs deepen our understanding of the ideas that forged the law of nations in a world of revolutions. Taking a time of extraordinary change as its frame of reference, Federal Union, Modern World relates the emergence of the modern concept of state-societies to the remarkable experiments in constitution-making in the United States. It shows how efforts to model a federal union in America influenced the broader relations of European nation-states.
Relying on ancient and early modern sources prominent in the minds of the Founders, the authors demonstrate how the idea of a federal union was applied to the nations of the world. This profound paradigm shift in international relations divorced the law of nations from naturalism and grafted it onto modern ideas of liberalism.
The formation of the United States as a federation, argue the Onufs, “expressed Enlightenment impulses . . . more fully than any contemporaneous developments in Europe.” Furthermore, as the Founders attempted to secure a tenable position for their creation, they inspired a shift in international relations theory from natural legal doctrine to the positive law of states.
This book is a contribution to the new history of “conceptual change,” drawing selectively on the history of diplomacy, political theory, and legal doctrine to identify and relate some important themes in the emergence of the modern world.
This relevant and timely study of international union and disunion informs us as much about the decades of revolution as it does about the context of international relations in our own time.

Jefferson and Madison: Three Conversations from the Founding 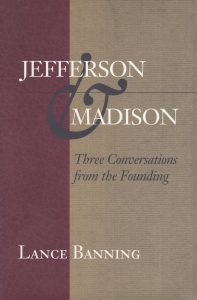 From the dust jacket—Amidst the whirlwind of Revolution and nation-making, Jefferson, author of the Declaration of Independence, and Madison, father of the Constitution, engaged in a series of intellectual discussions on the nature of the American experiment. In this thought-provoking study, Lance Banning revisits the intellectual friendship between the two founders and pursues the lines of their debate in the light of two centuries of history.
Banning examines Jefferson’s and Madison’s reflections on the purpose and need for a bill of rights, their discussion of the nature and necessity of “public spirit” in a republic, the usefulness of political rebellion, and upon Jefferson’s reminder that “the earth belongs . . . to the living.” The author adds selected primary documents to enhance each chapter.
This interchange of ideas between two of America’s greatest thinkers spanned many years and reveals the way in which Jefferson and Madison thought about democracy, public debt, the ownership of property, and the relationship between the present and future generations. Banning provides a glimpse into the intellectual world of Jefferson and Madison, as well as insight into our own.