A Necessary Evil?: Slavery and the Debate Over the Constitution 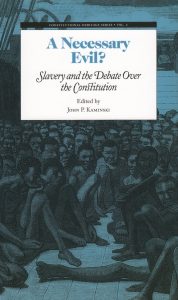 From slaveholders like Washington and Jefferson to abolitionists like Benjamin Rush and John Jay, slavery presented the creators of the American republic with a profound dilemma and an inextricable contradiction. This collection of primary sources (with illuminating introductions) describes the transformation of white America’s attitudes about slavery and freedom from the idealistic beginnings of the Revolution to the harsh realities of postwar depression and nation-building. Poignant stories describe how escaped slaves often voluntarily returned to their masters for limited periods of indenture, fearing that the Constitution’s fugitive slave clause would legally force them back into permanent slavery.

Federalists and Antifederalists: The Debate Over the Ratification of the Constitution 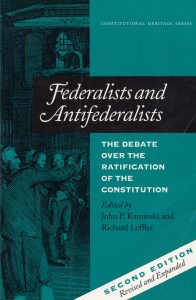 From the dust jacket—For a quarter century between 1763 and 1788, Americans intensely debated the nature of government and the need to protect individual liberties. The debate climaxed in the arguments over the ratification of the Constitution.

Through a selection of documents from 1787 and 1788, this book gives readers the flavor and immediacy of that debate in all its fire and political intensity. Ranging from thoughtful to vitriolic, these essays, newspaper articles, and speeches bring those ideas alive.

This updated edition contains an entirely new section on the debate over class structure, property rights, and the economy under the proposed Constitution—an ideal introduction to a debate as meaningful today as it was two centuries ago.

The Essential Federalist: A New Reading of the Federalist Papers

From the back cover—Jefferson called The Federalist “the best commentary on the principles of government which was ever written,” and yet the text is considered lifeless and impenetrable by all but the most persistent readers.

The Essential Federalist presents a bold new approach to reading one of the most important documents in American history. By careful selection, organization, and annotation of the essays’ most meaningful passages, this book showcases what is central to The Federalist. 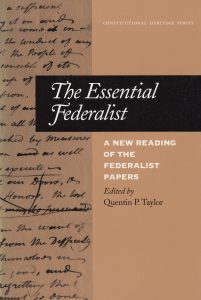 “If the road over which you will still have to pass,” in reading these papers, wrote Publius, “should in some places appear to you tedious or irksome, you will recollect that you are in quest of information on a subject the most momentous which can engage the attention of a free people. . . . It will be my aim to remove the obstacles to your progress in as compendious a manner as it can be done, without sacrificing utility to dispatch.”

Dr. Quentin P. Taylor takes up Publius’ challenge by making The Federalist an understandable and usable resource. This book will be essential reading for anyone who seeks to understand the roots of American government. It can be quite effective as a reader for classroom use.

Quentin P. Taylor is author of The Other Machiavelli: Republican Writings by the Author of “The Prince” and The Republic of Genius: A Reconstruction of Nietzsche’s Early Thought.