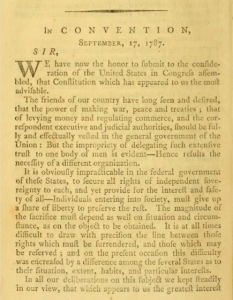 On 17 September 1787, after four months of intense deliberation, the Constitutional Convention agreed to a unique new federal system of government. Thirty-nine delegates signed the Constitution. George Washington signed as both president of the Convention and as a Virginia delegate. He also signed a cover letter addressed to the president of Congress explaining the Convention’s actions. Espousing the concept of separation of powers, the delegates felt that it would be dangerous simply to enlarge the powers of the unicameral Confederation Congress. Conforming to the concept of a social compact, the Convention relinquished certain rights by giving the central government a limited number of specified powers in order to secure all other remaining rights to the states and the people. The letter asserted that the Convention’s primary goal was the preservation of the Union “in which is involved our prosperity, felicity, safety, perhaps our national existence.”

This important consideration, seriously and deeply impressed on our minds, led each State in the Convention to be less rigid on points of inferior magnitude, than might have been otherwise expected; and thus the Constitution, which we now present, is the result of a spirit of amity, and of that mutual deference and concession which the peculiarity of our political situation rendered indispensable.

The letter acknowledged that the Constitution would not satisfy every state completely. But the delegates believed that it would “promote the lasting welfare of that country so dear to us all, and secure her freedom and happiness.” 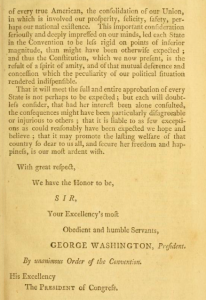 The manuscript letter was sent with the engrossed four-page manuscript Constitution to Congress where both documents were read on 20 September. Eventually placed in the National Archives, the letter disappeared many years ago. Its authorship has always been uncertain. Most historians believe that Gouverneur Morris, a Pennsylvania delegate, probably drafted it, but recently convincing evidence has surfaced that indicates that the letter was probably written by Alexander Hamilton. But it was Washington’s signature that gave the letter its political importance in ratifying the Constitution.

To delve deeper into this topic, look up Adam Levinson’s blog here.