When Americans contemplated independence, they feared success almost as much as failure. Staunchly believing in Alexander Pope’s maxim that “Order is Heaven’s first law,” Americans understood that they would have to create new forms of government to replace the discredited British monarchy. It was felt that all authority was derived from the people, who at stated times would elect trustees to administer their governments. Given the recent experience with the despotic British imperial officials, Americans did not want to establish a new imperial government in Philadelphia or New York City. Most authority, it was felt, should be given to the state governments while the federal government should sustain the peaceful Union and deal only with general concerns such as foreign relations and war. An overwhelming consensus agreed that some kind of a republic should be established in which the majority should rule. But republics hadn’t fared well throughout history. When formed over a large territory with a diverse population, republics often became despotic. When formed in small territories, they splintered from internal factional disputes.

It was felt that all authority was derived from the people, who at stated times would elect trustees to administer their governments. An overwhelming consensus agreed that some kind of a republic should be established in which the majority should rule. 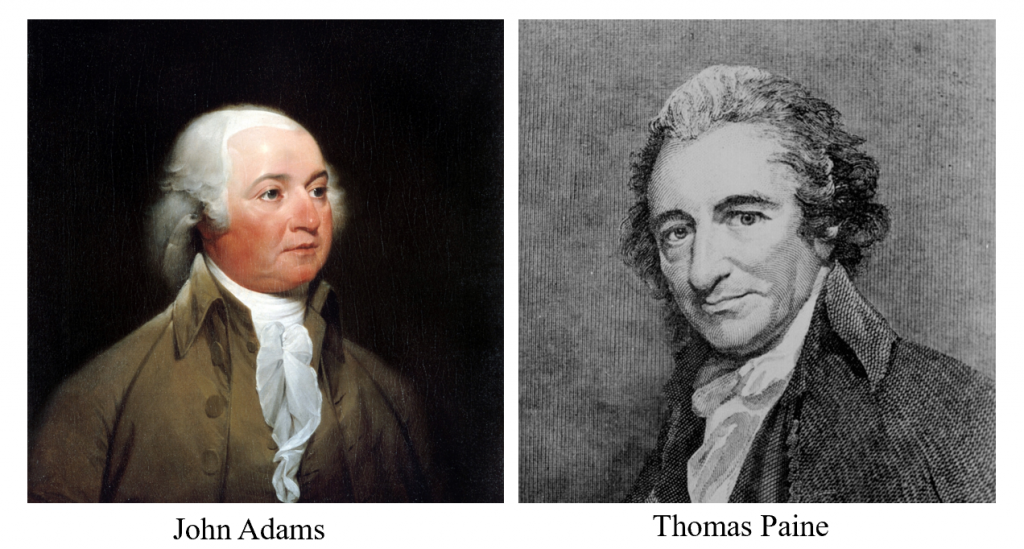 American political writers proposed a wide variety of republics for their state governments. Thomas Paine in his revolutionary pamphlet Common Sense (January 1776) advocated a democratic republic easily amenable to the will of the people with a unicameral legislature elected annually, no governor, and judges with tenure for only one year. Alternatively, John Adams’s influential pamphlet Thoughts on Government (March 1776) called for a balanced republic with a bicameral legislature and a governor, both elected annually, and judges with lifetime tenure. Pennsylvania and Georgia followed Paine’s advice and adopted very democratic state constitutions, while all of the other states followed Adams’s recommendations. At the national level, the Continental Congress in November 1777 proposed the Articles of Confederation which created a unicameral Congress elected annually with no separate executive or judiciary. Although Congress had some extensive powers, it could not act directly on the people and it had no coercive power to require state compliance. The Articles were adopted by the states three and a half years later.

By 1787, almost all Americans believed that the Articles of Confederation needed to be amended giving additional powers to Congress while diminishing the authority of the state legislatures. A young Noah Webster wrote that he had once been a staunch republican, but now he opposed the tyranny of the many in a republican form of government.

Elbridge Gerry of Massachusetts denounced “the excess of democracy.”  It wasn’t that the people lacked virtue, but that they “are the dupes of pretended patriots”; they were “daily  misled into the most baneful measures and opinions by the false reports circulated by designing men, and which no one on the spot can refute.”

The Constitutional Convention proposed a dramatically new system of government that divided authority between the state and national governments and structurally separated the branches of the federal government from each other with an elaborate system of checks and balances to assure that no one branch would dominate over the others. Anti-democratic provisions were strewn throughout, such as the equal state representation in the Senate, the presidential veto, lifetime tenure for federal judges, and supermajorities necessary to ratify treaties and to propose and adopt amendments to the Constitution.

The American people debated whether to adopt the Constitution for almost a year. Much of the debate centered on the nature of government in general and the type of government expected to be formed under the Constitution. Many were pleased that the Constitution would not form a democracy, which was thought to be too unstable.  In the Massachusetts ratifying convention, Fisher Ames likened democracy to a volcano, “which conceals the fiery materials of its own destruction. These will produce an eruption, and carry desolation in their way. The people always mean right; and, if time is allowed for reflection and information, they will do right. I would not have the first wish, the momentary impulse of the public mind, become law; for it is not always the sense of the people, with whom I admit that all power resides. On great questions, we first hear the loud clamors of passion, artifice, and faction.”

In The Federalist No. 10, James Madison wrote that “democracies have ever been spectacles of turbulence and contention; have ever been found incompatible with personal security or the rights of property; and have in general been as short in their lives as they are violent in their deaths.”

Pennsylvania Chief Justice Thomas McKean agreed with Alexander Pope that the form of government was unimportant. It was the administration that mattered.
“For forms of Government let fools contest,
Whate’er is best administered is best.”
McKean shocked Pennsylvanians when he declared in the ratifying convention that despotism was the best form of government if administered benevolently.

John Adams in 1776 had totally disagreed with Pope. “Nothing can be more fallacious than this. But poets read history to collect flowers, not fruits; they attend to fanciful images, not the effects of social institutions. Nothing is more certain, from the history of nations and nature of man, than that some forms of government are better fitted for being well administered than others.”

When asked what kind of government the Constitutional Convention had proposed in 1787, an 81-year-old Benjamin Franklin responded hopefully, “A Republic, if you can keep it.”

For over 230 years, the United States has functioned as a democratic, constitutional republic.