One of the most difficult problems faced by the Constitutional Convention was how to apportion representation of the states in Congress. The Great Compromise settled the controversy between the large and the small states by providing that the House of Representatives would be apportioned based on population, while the states would be equally represented in the Senate. Debate persisted over how to count the slave population when apportioning representatives. Southern States wanted to count the total slave population while Northern States did not want to count any slaves in making the apportionment. Another compromise determined that three-fifths of the total slave population should be counted in apportioning both representatives and direct taxes. The Convention agreed to hold a national census every ten years that would be used in determining the apportionment for the following ten years. The three-fifths clause provoked debate during the year-long struggle over the ratification of the Constitution. Its impact was felt not only in the House of Representatives but also in determining the number of presidential electors each state would have in the Electoral College.

The first U.S. Census act became law on 1 March 1790, and the census was completed by February 1792. The first reapportionment act became law on 14 April 1792. It provided that after 3 March 1793 the House of Representatives would consist of one member for every 33,000 persons in each state “computed according to the rule prescribed by the Constitution.” The following table lists the non-slave and slave population for each state taken from the 1790 census. The table also lists the total number of representatives for each state beginning in 1793 and how many of those representatives were the consequence of counting three-fifths of the slave population. Had the Convention agreed to count the full population of slaves for purposes of apportionment, Maryland, North Carolina, and South Carolina each would have received one additional representative, while Virginia would have received an additional three representatives. 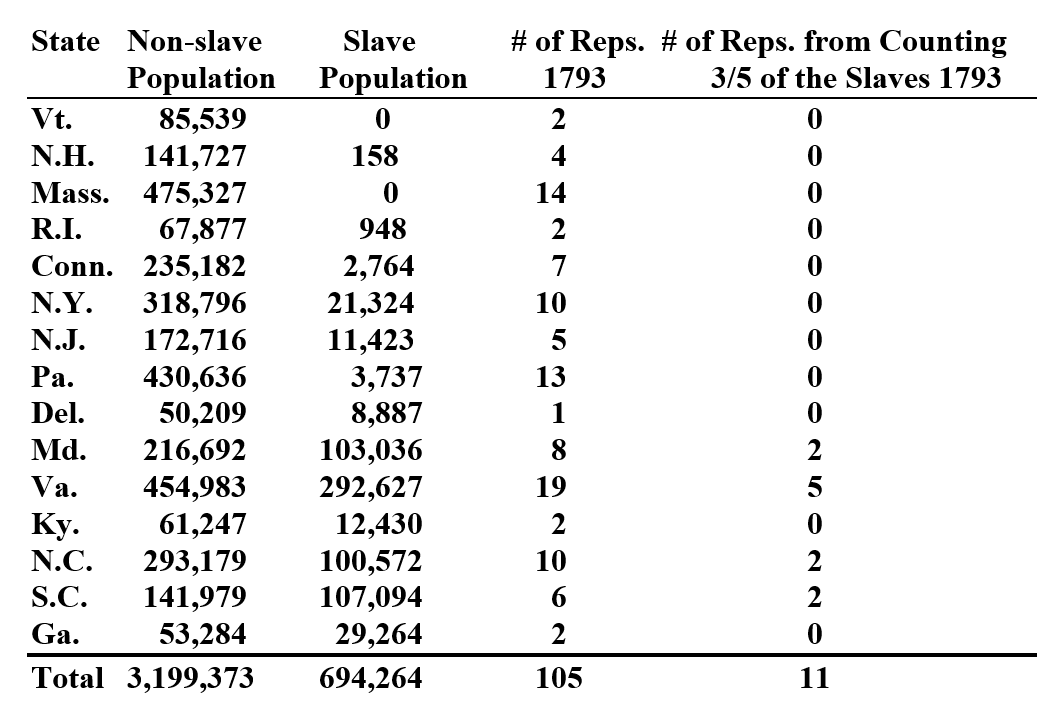 Excerpt from the U.S. Constitution, Article I, Section 2, Clause 3:

Representatives and direct Taxes shall be apportioned among the several States which may be included within this Union, according to their respective Numbers, which shall be determined by adding to the whole Number of free Persons, including those bound to Service for a Term of Years, and excluding Indians not taxed, three fifths of all other Persons. The actual Enumeration shall be made within three Years after the first Meeting of the Congress of the United States, and within every subsequent Term of ten Years, in such Manner as they shall by Law direct.