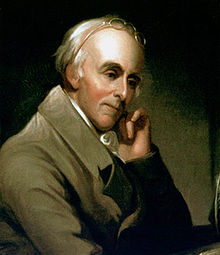 Dr. Rush came in. He is an elegant, ingenious Body. Sprightly, pretty fellow. He is a republican. He has been much in London. . . . But Rush I think, is too much of a Talker to be a deep Thinker. Elegant not great.

Doctor and politician. Knowledgeable, eloquent, active but vain and bombastic in debates. He affects too much enthusiasm for France to be believed sincere.

I see the old dispute revived with great violence for bleeding for fever and ague, and that Dr. Rush is charged with bleeding many hundreds to death. I was not very much surprised of this charge, but I confess I was surprised to see him appointed treasurer of the mint. I hope he won’t bleed that to death also. . . . I always considered the Doctor a wrong-headed politician. I know for a fact he was, at the election of President, very much in favor of the Vice President [i.e., Thomas Jefferson].

I have sometimes amused myself by enumerating the different kinds of hatred that operate in the world. They are the “odium theologicum,” the “odium politicum,” the “odium philologium,” and the “odium medicum.” It has been my lot—I will not call it my misfortune—to be exposed to them all. The divines hate me for holding tenets that they say lead to materialism and that are opposed to the rigid doctrines of Calvin. The politicians hate me for being neither a democrat nor a monarchist, neither a Frenchman nor an Englishman. The philologists hate me for writing against the dead languages; and the physicians for teaching a system of medicine that has robbed them by its simplicity of cargoes of technical lumber by which they imposed upon the credulity of the world.

As a man of Science, Letters, Taste, Sense, Philosophy, Patriotism, Religion, Morality, Merit, Usefulness, taken all-together Rush has not left his equal in America, nor that I know in the World. In him is taken away, and in a manner most sudden and totally unexpected a main Prop of my Life.

No one has taken a more sincere part than myself in the affliction which has lately befallen your family, by the loss of your inestimable and ever to be lamented father. His virtues rendered him dear to all who knew him, and his benevolence led him to do all men every good in his power. Much he was able to do, and much therefore will be missed. My acquaintance with him began in 1776. It soon became intimate, and from that time a warm friendship has been maintained by a correspondence of unreserved confidence. [Jefferson asks for the return of several letters he wrote to Benjamin Rush that contained personal information, such as Jefferson’s thoughts on religion.]