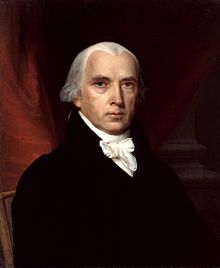 “He blends together the profound politician, with the Scholar.” (1787, William Pierce)

“He is also very timid, and seems evidently to want manly firmness and energy of character.” (1789, Fisher Ames)

Mr. Maddison is a character who has long been in public life; and what is very remarkable every Person seems to acknowledge his greatness. He blends together the profound politician, with the Scholar. In the management of every great question he evidently took the lead in the Convention, and tho’ he cannot be called an Orator, he is a most agreeable, eloquent, and convincing Speaker. From a spirit of industry and application which he possesses in a most eminent degree, he always comes forward the best informed Man of any point in debate. The affairs of the United States, he perhaps, has the most correct knowledge of, of any Man in the Union. He has been twice a Member of Congress, and was always thought one of the ablest Members that ever sat in that Council. Mr. Maddison is about 37 years of age, a Gentleman of great modesty,—with a remarkable sweet temper. He is easy and unreserved among his acquaintances, and has a most agreeable style of conversation.

Madison is a man of sense, reading, address, and integrity, as ’tis allowed. Very much Frenchified in his politics. He speaks low, his person is little and ordinary. He speaks decently, as to manner, and no more. His language is very pure, perspicuous, and to the point. Pardon me, if I add, that I think him a little too much of a book politician, and too timid in his politics, for prudence and caution are opposites of timidity. He is not a little of a Virginian, and thinks that state the land of promise, but is afraid of their state politics, and of his popularity there, more than I think he should be. . . . He is our first man.

Mr. Madison’s talents, respectable as they are will for some time be lost to the public, from his timidity. He is constantly haunted with the ghost of Patrick Henry. No man, in my opinion, in this country has more fair and honorable intentions, or more ardently wishes the prosperity of the public, but unfortunately he has not that strength of nerves which will enable him to set at defiance popular and factious clamors.

Alexander Hamilton to Edward Carrington, 26 May 1792

Mr. Madison cooperating with Mr. Jefferson . . . have a womanish attachment to France and a womanish resentment against Great Britain.

. . . now for M——— he told me I might say what I pleas’d to you about him to begin, he thinks so much of you in the day that he has Lost his Tongue, at Night he Dreams of you & Starts in his Sleep a Calling on you to relieve his Flame for he Burns to such an excess that he will be shortly consumed & he hopes that your Heart will be callous to every other swain but himself he has Consented to every thing that I have wrote about him with Sparkling Eyes.

His great fault as a politician appears to me a want of decision and a disposition to magnify his adversaries strength. [He has] a habit of considering the objections to his own plans so long and so frequently that they acquire a real weight & influence his conduct. . . . He never determines to act until he is absolutely forced by the pressure of affairs & then regrets that he has neglected some better opportunity. . . . He is a very amiable very well informed, and I believe one of the most honest & upright men this country possesses.

Mr. [John] Randolph most explicitly declared that most of the evils which the United States now suffered proceeded from the measures of the Executive—& from the weak feeble and pusillanamous spirit of the keeper of the Cabinet—the Secretary of State.

My confidence in the integrity of Mr. Jefferson and Mr. Madison, in their love of their country and the sincerity of their desires to serve its interests and promote its prosperity, is still entire. Of their genius, talents, learning, industry I am fully convinced, as all the rest of the world is. But either they are shallow statesmen or I am a natural fool. There is no other alternative or dilemma. Mr. Madison has more correct ideas; but as he has been borne up under the wing of Mr. Jefferson, he has been always shackled with Mr. Jefferson’s visions and prejudices

I have passed five delightful days at Mr. Madison’s. The situation of his residence is charming. The blossoms and verdure of the trees are just springing into perfection, and the scenery, embracing a distant view of the Blue Ridge, is commanding and beautiful. But I have had little time for these objects. . . . The intellect and memory of Mr. Madison appear to retain all their pristine vigor. He is peculiarly interesting in conversation, cheerful, gay, and full of anecdote; never a prosing talker, but sprightly, varied, fertile in his topics, and felicitous in his descriptions and illustrations. He seems busy in arranging his papers. While he was in the old Congress he rarely kept copies of his letters, though he wrote many. He has recently succeeded in procuring nearly all the originals from the descendants of the persons to whom he wrote them.