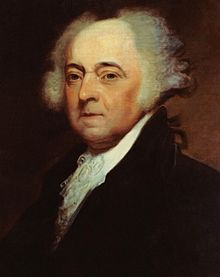 “This illustrious patriot has not his superior, scarcely his equal, for Abilities & virtue on the whole continent of America.” (1776, Benjamin Rush)

“He is vain, irritable and a bad calculator of the force and probable effect of the motives which govern men.… accurate in his judgment except where knowledge of the world is necessary to form a judgment.” (1787, Thomas Jefferson)

Born Braintree. Graduated from Harvard College, 1755. Taught school and studied law with James Putnam in Worcester. Admitted to Boston bar, 1758; practiced law in that town but lived in Braintree. Married Abigail Smith of Weymouth, 1764. Drafted Braintree resolutions against Stamp Act, 1765. Moved to Boston, 1768. Helped defend British soldiers after Boston massacre, 1770. Member, colonial House of Representatives, 1770. Election to Council rejected by governor, 1774. Returned to Braintree, 1774. Delegate to First Continental Congress, 1774. Represented Braintree in First Provincial Congress, 1774. Author of essays of “Novanglus,” 1775. Member, state Council, 1775. Chief justice of state Superior Court, 1775-77 (never took seat on bench). Delegate to Continental Congress, 1775-77. Author of Thoughts on Government, April 1776. Seconded motion in Congress for independence, June 1776; appointed to committees to prepare a declaration of independence and to plan for foreign alliances, June 1776; a leading advocate for and signer of Declaration of Independence. President, Continental Board of War, 1776-77. Appointed a commissioner to France to replace Silas Deane, 1777. Returned to U.S., 1779. Member, state constitutional convention, 1779; primary author of state constitution of 1780. Appointed minister plenipotentiary to negotiate treaties of peace and commerce with Great Britain, 1779. Appointed commissioner to negotiate treaties of amity and commerce with United Provinces (Holland), 1780. Served as a commissioner to negotiate peace treaty ending war with Great Britain, 1781-83. Minister plenipotentiary to United Provinces, 1781-88, negotiates loans with Dutch bankers. Minister plenipotentiary to Great Britain, 1785-88. Along with Benjamin Franklin and Thomas Jefferson empowered to conclude commercial treaties with European and African nations, 1784. Author of three-volume Defence of the Constitutions of the United States, 1787-88. Returned to America, June 1788. Vice President of U.S., 1789-97. President of U.S., 1797-1801. Member, state constitutional convention, 1820. Died July 4, 1826, fiftieth anniversary of the approval of the Declaration of Independence.

Candor is my Characteristic.

There are very few People in this World with whom I can bear to converse. I can treat all with Decency and Civility, and converse with them, when it is necessary, on Points of Business. But I am never happy in their Company. This has made me a Recluse, and will one day, make me an Hermit.

Lord Howe sent a message to us a few days ago requesting a conference with some members of the Congress. Dr. Franklin, Mr. John Adams, and Mr. [Edward] Rutledge were ordered to wait upon his Lordship. He talked much of his powers to accommodate the dispute between Britain & America, but said he could offer nothing & promise nothing till we returned to our Allegiance. Here the negotiation ended. All America disdains such propositions. I must here mention an anecdote in honor of Mr. Adams. When his Lordship asked in what capacity he was to receive the gentlemen of Congress, Mr. Adams told him “in any capacity his Lordship pleased except in that of BRITISH SUBJECTS.” This illustrious patriot has not his superior, scarcely his equal, for Abilities & virtue on the whole continent of America.

Congress yesterday received from Mr. Adams several letters dated September not remarkable for any thing unless it be a display of his vanity, his prejudice against the French Court & his venom against Doctor Franklin.

From what you mention in your letter I suppose the newspapers must be wrong when they say that Mr. Adams had taken up his abode with Dr. Franklin. I am nearly at a loss to judge how he will act in the negotiation [of the peace treaty with England]. He hates Franklin, he hates Jay, he hates the French, he hates the English. To whom will he adhere? His vanity is a lineament in his character which had entirely escaped me. His want of taste I had observed. Notwithstanding all this he has a sound head on substantial points, and I think he has integrity. I am glad therefore that he is of the commission and expect he will be useful in it. His dislike of all parties, and all men, by balancing his prejudices, may give the same fair play to his reason as would a general benevolence of temper. At any rate honesty may be extracted even from poisonous weeds.

I ought not, however, to conceal from you, that one of my Colleagues is of a very different Opinion from me in these Matters. He thinks the French Minister one of the greatest Enemies of our Country, that he would have straitened our Boundaries, to prevent the Growth of our People; contracted our Fishery, to obstruct the Increase of our Seamen; and retained the Royalists among us, to keep us divided; that he privately opposes all our Negotiations with foreign Courts, and afforded us, during the War, the Assistance we received only to keep it alive, that we might be so much the more weakened by it; that to think of Gratitude to France is the greatest of Follies, and that to be influenced by it would ruin us. He makes no Secret of his having these Opinions, expresses them publicly, sometimes in presence of the English Ministers, and speaks of hundreds of Instances when he could produce in Proof of them. None of which however, have yet appeared to me, unless the Conversations and Letter above-mentioned are reckoned such.

If I were not convinced of the real Inability of this Court to furnish the further Supplies we asked, I should suspect these Discourses of a Person in his Station might have influenced the Refusal; but I think they have gone no farther than to occasion a Suspicion, that we have a considerable Party of Antigallicans in America, who are not Tories, and consequently to produce some doubts of the Continuance of our Friendship. As such Doubts may hereafter have a bad Effect, I think we cannot take too much care to remove them; and it is, therefore, I write this, to put you on your guard, (believing it my duty, though I know that I hazard by it a mortal Enmity), and to caution you respecting the Insinuations of this Gentleman against this Court, and the Instances he supposes of their ill will to us, which I take to be as imaginary as I know his Fancies to be, that Count de V. and myself are continually plotting against him, and employing the News-Writers of Europe to depreciate his Character, &c. But as Shakespeare says, “Triffles lights as Air,” &c. I am persuaded, however, that he means well for his Country, is always an honest Man, often a wise one, but sometimes, and in some things, absolutely out of his senses.

My Apprehension, that the Union between France and our States might be diminished by Accounts from hence, was occasioned by the extravagant and violent Language held here by a Public Person, in public Company, which had that Tendency; and it was natural for me to think his Letters might hold the same Language, in which I was right; for I have since had Letters from Boston informing me of it. Luckily here, and I hope there, it is imputed to the true Cause, a Disorder in the Brain, which, though not constant, has its Fits too frequent.

You know the opinion I formerly entertained of my friend Mr. Adams. Yourself & the governor were the first who shook that opinion. I afterwards saw proofs which convicted him of a degree of vanity, and of a blindness to it, of which no germ had appeared in Congress. A 7 months intimacy with him here and as many weeks in London have given me opportunities of studying him closely. He is vain, irritable and a bad calculator of the force and probable effect of the motives which govern men. This is all the ill which can possibly be said of him. He is as disinterested as the being which made him: he is profound in his views: and accurate in his judgment except where knowledge of the world is necessary to form a judgment. He is so amiable, that I pronounce you will love him if ever you become acquainted with him. He would be, as he was, a great man in Congress.

Mr. Adams like other men has his faults and his foibles. Some of the opinions he is supposed to entertain, we do not approve—but we believe him to be honest firm faithful and independent—a sincere lover of his country—a real friend to genuine liberty; but combining his attachment to that with the love of order and stable government. No man’s private character can be fairer than his. No man has given stronger proofs than him of disinterested & intrepid patriotism.

At one o’clock I was presented to Mr. Adams. He was sitting, reading a newspaper, facing the fireplace with Mr. [Samuel B.] Malcolm, a young man 20 years old, his private secretary. I saw a dumpy little man dressed wholly in gray, well-powdered hair and a long pigtail. His face appeared to me that of a good and honest man, touched nevertheless with a grain of malice.

Thomas Paine, “To the Citizens of the United States,” 22 November 1802

It has been the political career of this man to begin with hypocrisy, proceed with arrogance, and finish in contempt. May such be the fate of all such characters.

I think it part of his character to suspect foul play in those of whom he is jealous, and not easily to relinquish his suspicions.

John Adams was our Colossus on the floor. He was not graceful, nor elegant, nor remarkably fluent; but he came out occasionally with a power of thought & expression, that moved us from our seats.

All unpleasant feelings towards Mr. Adams, had ceased long before the occurrence of the above mentioned correspondence. A subsequent event obliged me, in my own vindication, to expose publicly his faults. Still I view, as I have always viewed him, as a man of eminent talents, zealously, courageously & faithfully exerted in effecting the Independence of the Thirteen United Colonies: and I believe that he, more than any other individual, roused and prepared the minds of his fellow citizens to decide positively and timely that greatest revolutionary question.