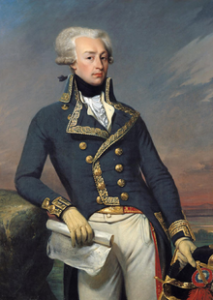 “He is a prodigy for his age; he is the model of valor, intelligence, judgment, good conduct, generosity, and zeal for the cause of liberty. . .” (1777, Baron De Kalb)

Born in Chavaniac, France. Inherited great wealth and title after the death of parents and grandfather. Moves to Paris, 1768. King’s Musketeers, 1771. Marries Adrienne de Noailles, 1774. Joins Noailles regiment and Freemasons, 1775. Sails for U.S., 1777. Commissioned major general in Continental Army (without a command), 1777. Wounded at Battle of Brandywine, Sept. 1777. At Valley Forge, 1777-78. Returns to France, January 1779. Returns to U.S. with French fleet and army, 1780. In command of all U.S. forces in Virginia, 1781. Commands capture of Redoubt Ten at Yorktown. Made citizen of Virginia, Maryland, and Connecticut. Returns to France 1782. Visits U.S., 1784. While in France lobbies for U.S. Leader French Revolution. Sends Washington key to the Bastille, 1789. General French Army. Proscribed by French radicals. While escaping to The Netherlands is captured and imprisoned by Germans/Austrians, 1792-97. Returns to France, 1799. Visits U.S., 1824-25.

At length, the Marquis de la Fayette, a young Nobleman of the first family and connections at Court, viz. that of Noailles, has equipped a vessel, at his own expense, to transport him and the Baron [de Kalb], with other Officers, to America. As my letters were very particular at the time, and as we shall write express by Capt. Hammond in a few days, will not detain you more than to recommend this young Nobleman to your particular notice and attention. His family are of the first influence here, and have, for ages, been celebrated in the affairs of this Country, as well in peace as war. His fortune puts him above all pecuniary considerations, and he desires none, but wishes to rank with Gentlemen of the first character in the Army.

Among other curiosities there, I saw the young Marquis de la Fayette, a Nobleman of the first fortune and family in France, the favorite of Court and Country. He left behind him a most beautiful young wife, and all the soft enjoyments that such a situation, with an immense fortune in a polished Country can furnish to fight in American wilderness for American Liberty! After this can there be a Tory in the World? He has rank of Major General in the Continental Army & fights without pay. He is thirsty for glory but the Commissioners at Paris wish the General may restrain the ardor of youth and not suffer his exposure but on some signal occasion. He is sensible, polite, and good natured. How this example ought to gall the worthless Nobility & Gentry of England, who meanly creep into the Tyrant’s service to destroy that liberty which a generous Frenchman quits every delight to defend through every difficulty!

The friendship with which he has honored me since I made his acquaintance, and that which I have vowed to him because of his personal qualities, oblige me to have that deference for him. No one is more deserving than he of the consideration he enjoys here. He is a prodigy for his age; he is the model of valor, intelligence, judgment, good conduct, generosity, and zeal for the cause of liberty for this continent. His wound is healing very well. He has just rejoined the army, so as not to miss any chances for glory and danger.

Once I set foot in the American camp, I gave up bookish studies. Forgetting belles-lettres, I attempted to educate myself in a cruel and barbarous art. I am so possessed by the demon of war that I have totally abandoned myself to military occupations. Finally, having renounced the gentle company of women, verse, and the Muses, I now find pleasure in the horrible voluptuousness of Bellona.

. . . unlimited ambition will obstruct his rise. He grasps at all civil, political, and military, and would be the unum necessarium in every thing. He has had so much real merit, such family supports, and so much favor at court that he need not recur to artifice. . . . He has gained more applause than human nature at 25 can bear. It has enkindled in him an unbridled ambition . . . this mongrel character of French patriot and American patriot cannot exist long.

The time I have lately passed with the M. has given me a pretty thorough insight into his character. With great natural frankness of temper he unites much address with very considerable talents, a strong thirst of praise and popularity. In his politics he says his three hobby horses are the alliance between France and the United States, the union of the latter and the manumission of the slaves. The two former are the dearer to him as they are connected with his personal glory. The last does him real honor as it is a proof of his humanity. In a word I take him to be as amiable a man as can be imagined and as sincere an American as any Frenchman can be; one whose past services gratitude obliges us to acknowledge, and whose future friendship prudence requires us to cultivate.

The Marquis you know. He is dangerously amiable, sensible, polite, affable insinuating pleasing hospitable indefatigable and ambitious. Let our Country Guard let them watch let them fear his virtues and remember that the summit of perfection is the point of declension.

Subsequent to the date of mine in which I gave my idea of Fayette I had further opportunities of penetrating his character. Though his foibles did not disappear all the favorable traits presented themselves in a stronger light. On closer inspection he certainly possesses talents which might figure in any line. If he is ambitious it is rather of the praise which virtue dedicates to merit than of the homage which fears renders to power. His disposition is naturally warm and affectionate and his attachment to the United States unquestionable. Unless I am grossly deceived you will find his zeal sincere & useful whenever it can be employed in behalf of the United States without opposition to the essential interests of France.

I am glad you have seen La F[ayette], and not surprised that you found him full of the same fanaticism from which he has already suffered so much, a great part of which, however, with him is what it always was, ungovernable ambition in disguise. He is willing to look upon himself as a martyr of liberty, because five years of imprisonment lose almost all their credit and reputation, when they are considered as having been the result of folly or wickedness. There is therefore more address and subtlety in his enthusiasm, than you think. His character, at least as far as judgment combined with honesty is concerned, has long since been irretrievable with thinking men. By recanting he would gain nothing in their opinion, and he would lose most of his personal partisans. I believe he thinks his intentions as good as you allow them to be, but he is a man extremely apt to mistake the operations of his heart as well as those of his head. You will very probably discover before he quits your neighborhood, that he deals largely in a sort of minute intrigue not calculated to inspire confidence.