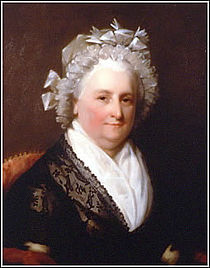 “I am again fairly settled down to the pleasant duties of an old fashioned Virginia house-keeper, steady as a clock, busy as a bee, and as cheerful as a cricket.” (1797, Martha Washington)

“… one of the most estimable persons that one could know, good, sweet, and extremely polite. She loves to talk and talks very well about time past.” (1798, Julian Ursyn Niemcewicz)

Born in New Kent County, Va., she was the eldest of eight children in a typical middlegentry family. Her education consisted of reading, writing, arithmetic, music, dance, domestic arts, and household management. She was an accomplished equestrienne. In May 1750 she married Daniel Parke Custis, a wealthy Virginia planter. He died in July 1757, leaving an estate of over £23,000 (more than 17,500 acres and 300 slaves). Martha had four children, two of whom survived. She married George Washington on January 6, 1759. She was five foot tall; he six foot three inches. Martha ran the household staff at Mount Vernon, which consisted of eleven slaves—two cooks, two waiters, two laundresses, one seamstress, and a personal servant for each family member. She had control over the mansion house, the kitchen, the smokehouse, the spinning house, and the wash house. Her daughter Patsy died at the age of seventeen in 1773 and her son John Parke, somewhat indolent and lacking ambition, died in 1781. Two of his children were raised at Mount Vernon by Martha and George. Unlike Abigail Adams, Martha Washington avoided politics, but always served as the perfect hostess for the frequent visitors to Mount Vernon and to the President’s Mansion in New York City and then in Philadelphia. When Washington died, Martha destroyed their correspondence. In Washington’s will, he provided for the emancipation of all of their slaves when Martha died. She freed the slaves in 1801.

I am now I believe fixed at this Seat with an agreeable Consort for Life and hope to find more happiness in retirement than I ever experienced amidst a wide and bustling World.

I was much pleased with Mrs. Washington and her spirit. She seemed ready to make any sacrifice and was cheerful though I knew she felt anxious. She talked like a Spartan mother to her son on going to battle. “I hope you will stand firm—I know George will,” she said. The dear little woman was busy from morning until night with domestic duties, but she gave us much time in conversation and affording us entertainment. When we set off in the morning, she stood in the door and cheered us with the good words, “God be with you gentlemen.”

I Arrived at my Lodgings before Dinner the day I Left you: found an obliging Family, Convenient Room and in the Main an agreeable set of Lodgers. Next Morning I took a Ride to Cambridge and waited on Mrs. Washington at 11 o’clock, where I was Received with that politeness and Respect shown in a first interview among the well bred and with the Ease and Cordiality of Friendship of a much Earlier date. If you wish to hear more of this Lady’s Character I will tell you I think the Complacency of her Manners speaks at once the Benevolence of her Heart, and her affability, Candor and Gentleness Qualify her to soften the hours of private Life or to sweeten the Cares of the Hero and smooth the Rugged scenes of War.

She reminded me of the Roman matrons of whom I had read so much, and I thought that she well deserved to be the companion and friend of the greatest man of the age.

I took the earliest opportunity (the morning after my arrival [in New York City]) to go & pay my respects to Mrs. Washington. Mrs Smith [Abigail Adams Smith] accompanied me. She received me with great ease & politeness. She is plain in her dress, but that plainness is the best of every article. She is in mourning. Her Hair is white, her Teeth beautiful, her person rather short than otherways, hardly so large as my Ladyship, and if I was to speak sincerely, I think she is a much better figure. Her manners are modest and unassuming, dignified and feminine, not the Tincture of hauteur* about her.

Mrs. Washington is one of those unassuming characters which creates Love & Esteem. A most becoming pleasantness sits upon her countenance & an unaffected deportment which renders her the object of veneration and Respect. With all these feelings and Sensations I found myself much more deeply impressed than I ever did before their Majesties of Britain.

I live a very dull life here and know nothing that passes in the town—I never go to the public place—indeed I think I am more like a state prisoner than anything else, there is certain bounds set for me which I must not depart from—and as I can not do as I like I am obstinate and stay at home a great deal.

Upon my return to the house [Mount Vernon], I found Mrs. Washington and her granddaughter Miss Custis in the hall. I introduced myself to Mrs. Washington as a friend of her Nephew, and she immediately entered into conversation upon the prospect from the Lawn and presently gave me an account of her family in a good humored free manner that was extremely pleasant and flattering. She retains strong remains of considerable beauty, seems to enjoy very good health and to have as good humor. She has no affectation of superiority in the slightest degree, but acts completely in the character of the Mistress of the house of a respectable and opulent country gentleman.

I cannot tell you, My dear friend, how much I enjoy home after having been deprived of one so long, for our dwelling in New York and Philadelphia was not home, only a sojourning. The General and I feel like children just released from school or from a hard taskmaster, and we believe that nothing can tempt us to leave the sacred roof-tree again, except on private business or pleasure. We are so penurious with our enjoyment that we are loath to share it with anyone but dear friends, yet almost every day some stranger claims a portion of it, and we cannot refuse. . . .

Our furniture and other things sent to us from Philadelphia arrived safely; our plate we brought with us in the carriage. How many dear friends I have left behind. They fill my memory with sweet thoughts. Shall I ever see them again? Not likely, unless they shall come to me here, for the twilight is gathering around our lives. I am again fairly settled down to the pleasant duties of an old fashioned Virginia house-keeper, steady as a clock, busy as a bee, and as cheerful as a cricket.

I then went up to Mrs. Washington. She is the same age as the General (both were born in 1732), small, with lively eyes, a gay air and extremely kind. She had on a gown, with an even hem, of stiff white cotton, fitting very tightly, or rather attached from all sides with pins. A bonnet of white gauze, ribbons of the same color, encircling her head tightly, leaving the forehead completely uncovered and hiding only half of her white hair which in back was done up in a little pigtail. She was at one time one of the most beautiful women in America and today there remains something extremely agreeable and attractive about her. She has never had any children by General Washington. She had four by her first husband, Mr. Custis.