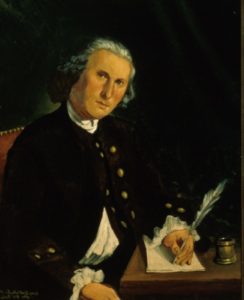 “… his Character has a Mist about it of suspicion and Impunity which gives occasion to the Enemy to censure.” (1796, John Adams)

“He loves to croak and grumble, and in the very same breath he amuses you extremely by his anecdotes and pleasantry.” (1808, Joseph Story)

Upon recollecting the Debates of this Day in Congress, there appears to me a remarkable Want of Judgment in some of our Members. Chase is violent and boisterous, asking his Pardon. He is tedious upon frivolous Points.

Mayor and Aldermen of Annapolis, During the Revolution

[Chase was a] busy, restless incendiary, a Ringleader of Mobs—a foul-mouth’d and inflaming son of Discord and Faction—a common Disturber of the public Tranquility, and a Promoter of the lawless excesses of the multitude.

I wrote to Chase with reflection and Cool deliberation. I do & must continue to look upon Him as a Rogue unworthy the Society of Honest Men unless He acknowledges His fault & endeavors Sincerely to Atone for it.

Elder member of Congress. Man of superior talents, as much for jurisprudence as for legislation, but whose moral character has often been attacked, without his excuses ever fully justifying himself.

Mr. Chase is a new Judge, but although a good 1774 Man his Character has a Mist about it of suspicion and Impurity which gives occasion to the Enemy to censure. He has been a warm Party Man, and has made many Ennemies. His Corpulency . . . is against his riding Circuit very long.

Thos. Cooper of Northumberland was tried and convicted on Saturday last for a libel on the President. A more oppressive and disgusting proceeding I never saw. Chase in his charge to the Jury (in a speech of an hour) showed all the zeal of a well fee’d Lawyer and the rancour of a vindictive and implacable enemy.

Judge Chase [was] An Unprincipled tyrant, totally unfit to be intrusted with any power over the lives or liberties of the free citizens of America.

Judge Chase (one of the largest men I ever saw) is as remarkable for the largeness as Johnny [John Randolph of Roanoke] for the smallness of his size.

Accompanied by Mr. Harper, I paid a visit to Judge Chase, who is a rough, but very sensible man. He has counted nearly seventy winters, and yet possesses considerable vigor and vivacity; but the flashes are irregular and sometimes ill-directed. In his person, he is tall, and not unlike [Theophilus] Parsons [that is, corpulent]. I suspect he is the American Thurlow,–bold, impetuous, overbearing, and decisive. He received us very kindly and with all his plainness of manners, I confess that he impressed me with respect.

Of Chase I have formerly written. On a nearer view, I am satisfied that the elements of his mind are of the very first excellence; age and infirmity have in some degree impaired them. His manners are coarse, and in appearance harsh; but in reality he abounds with good humor. He loves to croak and grumble, and in the very same breath he amuses you extremely by his anecdotes and pleasantry. His first approach is formidable, but all difficulty vanishes when you once understand him. In person, in manners, in unwieldy strength, in severity of reproof, in real tenderness of heart; and above all in intellect, he is the living, I had almost said the exact image of Samuel Johnson. To use a provincial expression, I like him hugely.