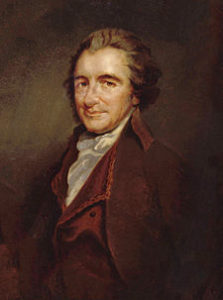 “What he penned from the inspiration of the brandy, was perfectly fit for the press without any alteration, or correction.” (1775, Robert Aitken)

“There never was a man less beloved in a place than Payne is in this, having at different times disputed with everybody.” (1781, Sarah Bache)

[Robert] Aitken contracted with Paine to furnish, monthly, for this work [i.e., the Pennsylvania Magazine] a certain quantity of original matter; but he often found it difficult to prevail on Paine to comply with his engagement. On one of the occasions, when Paine had neglected to supply the materials for the Magazine, within a short time of the day of publication, Aitken went to his lodgings, and complained of his neglecting to fulfill his contract. Paine heard him patiently, and coolly answered, “You shall have them in time.” Aitken expressed some doubts on the subject, and insisted on Paine’s accompanying him and proceeding immediately to business, as the workmen were waiting for copy. He accordingly went home with Aitken, and was soon seated at the table with the necessary apparatus, which always included a glass, and a decanter of brandy. Aitken remarked, “he would never write without that.” The first glass put him in a train of thinking; Aitken feared the second would disqualify him, or render him untractable; but it only illuminated his intellectual system; and when he had swallowed the third glass, he wrote with great rapidity, intelligence, and precision; and his ideas appeared to flow faster than he could commit them to paper. What he penned from the inspiration of the brandy, was perfectly fit for the press without any alteration, or correction.*

*“Aitken was a man of truth, and of an irreproachable character. This anecdote came from him some years before his death.” Source: Isaiah Thomas: The History of Printing in America, 1810.

I am neither farmer, manufacturer, mechanic, merchant nor shopkeeper. I believe, however, I am of the first class. I am a Farmer of thoughts.

[Paine was] a mere Adventurer from England, without Fortune, without Family or Connections, ignorant even of Grammar.

I hear Mr. Payne is gone to France with Mr. Lawrence [John Laurens]. He did not call on us. I had a little dispute with him more than a year ago about Mr. Deane, since which time he has never even moved his hat to me. He has lately wrote a Pamphlet called Public Good, which you will receive. Tis called sensible, but he appears throughout to be much afraid of his old employers the Lees, who are interested Virginians. There never was a man less beloved in a place than Payne is in this, having at different times disputed with everybody. The most rational thing he could have done would have been to have died the instant he had finished his Common Sense, for he never again will have it in his power to leave the World with so much credit.

Although he has an excellent Pen to write he has but an indifferent Head to think.

Have you read Paine’s* and Priestley’s answers to Burke’s pamphlet? They are both masterly performances, although they possess different species of merit. Paine destroys error by successive flashes of lightning. Priestley wears it away by successive strokes of electricity.

I could easily excuse, in an American, his prejudice against England but his egregious conceit and presumptuous self-sufficiency quite disgusted me. He was drunk with vanity. If you believed him, it was he who had done everything in America. He was an absolute caricature of the vainest of Frenchmen. He fancied that his book upon the Rights of Man ought to be substituted for every other book in the world; and he told us roundly that, if it were in his power to annihilate every library in existence, he would do so without hesitation in order to eradicate the errors they contained and commence with the Rights of Man, a new era of ideas and principles. He knew all his own writings by heart, but he knew nothing else. . . . Yet Paine was a man of talent, full of imagination, gifted with popular eloquence, and wielded, not without skill, the weapon of irony.

You have doubtless heard of the arrival of the notorious Tom Paine in this country—Being informed, previous to my arrival here, that he was in this neighborhood I had some curiosity to see him—I stopped at the public house where I am now writing to spend one day (it being in a central situation & convenient to the Public Offices where I do business) —I walked out for an hour & returned to dinner—on entering the room—to my great surprise I found that T. Paine was there & a lodger in the house & in less than five minutes we were seated opposite each other at the table—

I was not disappointed in my expectation of his appearance—I found him the same filthy old sot that he has ever been represented. . . . I should judge from his appearance that he is nearly 70 years of age. . . . He is about five feet 10 inches high—his hair three-fourth white—black eyes—a large bulbous nose—a large mouth drawn down at the corners with flabby lips—with more than half decayed, horrid looking teeth—his complexion of a brick color—his face & nose covered with carbuncles & spots of a darker hue than the general color of his skin—his dress rather mean & his whole appearance very slovenly—his hands so convulsed that while his expansive lips almost encompassed a wine glass, he could hardly get the contents of it into his head without spilling it. . . . In short he is a mere loathsome carcass, which has withstood the ravages & rackings of brutal intemperance for an uncommon length of time & from which (were it exposed on the barren heath of Africa) the Hyena & Jackals would turn away with disgust.

He observed that he had dined with Mr. Jefferson yesterday & the Day before—& I make no doubt he is a “bosom friend” of the President. . . . Though some of the democrats will swallow common carrion with a good relish, I think most of them will loath the putrid rattle snake which has died from the venom of his own bite.

I am willing you should call this the Age of Frivolity . . . and would not object if you had named it the Age of Folly, Vice, Frenzy, Brutality, Daemons, Buonaparte, Tom Paine, or the Burning Brand from the Bottomless Pit, or anything but the Age of Reason. I know not whether any man in the world has had more influence on its inhabitants or affairs for the last thirty years than Tom Paine. There can be no severer Satyr on the Age. For such a Mongrel between Pigg and Puppy, begotten by a wild Boar on a Bitch Wolf, never before in any Age of the World was suffered by the Poltroonery of Mankind, to run through such a Career of Mischief. Call it then the Age of Paine