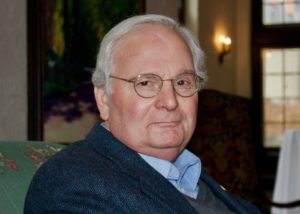 After receiving his bachelor’s degree from Brooklyn College, Richard Leffler in 1967 enrolled in the graduate history program at the University of Wisconsin-Madison, where he received his MA and Ph.D. While researching for his dissertation in North Carolina, he searched for manuscripts for the Ratification Project. He started working full time on the project in 1973. In 1981, he co-founded the Center for the Study of the American Constitution in the History Department at the University, where he served as deputy director until his retirement in 2009. He co-edited twenty-six volumes of The Documentary History of the Ratification of the Constitution and several other books on the Constitution. He has served as president of the Association for Documentary Editing. He and his wife Joan reside in Madison and continue to assist and participate in programs at the Wisconsin Historical Society, the UW-Madison Memorial Library, and several other educational, cultural, and health organizations.