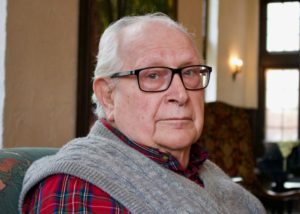 Gaspare J. (“Sal”) Saladino was a student of Professor Merrill Jensen at the University of Wisconsin–Madison, and received his Ph.D. in 1964. For three years he taught at the State University of New York at Albany, N.Y., before joining the staff of the “Adams Papers” at the Massachusetts Historical Society, and then worked as a researcher at the National Historical Publications Commission in the National Archives. Sal joined the staff of The Documentary History of the Ratification of the Constitution, in 1969. He served an associate editor, then co-editor, and then as a retired volunteer on the project. During his tenure, 34 volumes were published. Sal passed away on May 16, 2019, in Madison, Wisconsin.