Born in London in 1688, Alexander Pope was the most frequently cited author by America’s Founding generation. Often writers citing Pope’s works would not use his name but would simply refer to him as “the poet.” Even today, Pope is cited second only to Shakespeare. He wrote such well recognized lines as: “Fools rush in where angels fear to tread”; “Hope springs eternal in the human breast”; “The proper study of Mankind, is Man”; and “An honest man’s the noblest work of God.” Pope was particularly known for his biting satire written in heroic couplets.

Pope suffered many tribulations during his life. He and his family were Catholics, which meant that they were subject to the old and more recent Test Acts that prohibited Catholics from doing a variety of things including living within ten miles of London, attending public schools or a university, voting, or holding public office. His aunt taught him to read, and, after 1700, Pope was largely self-taught. He learned French, Italian, Latin, and Greek by himself. As a child he was trampled by a cow. Throughout his life, he suffered from a spinal disease that stunted his growth (to only 4’ 6”) and plagued him with a severe hunchback. He also suffered from debilitating headaches.

Pope’s poems were published beginning in 1709. He became associated with some of the great literary figures of his day, including Jonathan Swift, Richard Steele, and Joseph Addison. He became a harsh critic and satirist of Prime Minister Robert Walpole and the court of George II. His satires created such animosity that Pope carried pistols when he walked his large dog (a great Dane). 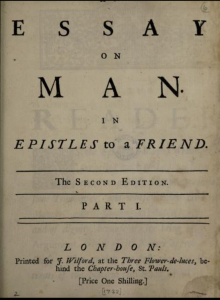 Americans most frequently cited Pope’s Essay on Man, a poem published in four epistles between 1733 and 1734. Using heroic couplets throughout, Pope presents his image of the universe. No matter how complex, disorganized and inscrutable the universe might appear, it is really a well-integrated machine subject to natural laws established by God. According to Pope, “Order is Heaven’s first law.” Humans often viewed the universe as evil or imperfect, but Pope attributes that perspective to the limited intellectual capability of the human mind. To be happy and virtuous, Pope argued that humans must accept their position in the “Great Chain of Being” someway between angels and beasts, and they must realize that “Whatever is, is Right.” The poem popularized the optimistic philosophy of the era. Voltaire called the Essay on Man “the most beautiful, the most useful, the most sublime didactic poem ever written in any language,” while Rousseau wrote that it “softens my ills and brings me patience.” Pope wrote little after 1738 and died at the age of 56 in 1744.

One of Pope’s frequently cited couplets deals with constitution-making.

Whate’er is best administered is best.

John Adams ridiculed this couplet in his Thoughts on Government (spring 1776) stating that it “flattered tyrants too much.” According to Adams, “Nothing can be more fallacious than this. But poets read history to collect flowers, not fruits; they attend to fanciful images, not the effects of social institutions. Nothing is more certain, from the history of nations and the nature of man, than that some forms of government are better fitted for being well administered than others.” Adams then when on to propose a balanced government as opposed to the unchecked democratic unicameralism espoused by Thomas Paine in Common Sense.

Obversely, Pennsylvania Chief Justice Thomas McKean quoted and espoused the couplet in a speech in the Pennsylvania ratifying Convention on November 28, 1787. If wisely administered, McKean argued, despotism was the best form of government to promote “the freedom, wealth, and happiness of the people.” Opponents of the Constitution denounced McKean, arguing that the Constitution would indeed lead to despotism.

Alexander Hamilton, in The Federalist No. 68 also quoted the couplet on forms of government saying “though we cannot acquiesce in the political heresy of the poet, . . . yet we may safely pronounce, that the true test of a good government is its aptitude and tendency to produce a good administration.”

Abigail Adams regularly quoted or paraphrased Pope to substantiate admonitions she made to her correspondents that included her children, her husband, her sisters, and her friends. In writing to her husband’s secretary, she gave her spin on Pope’s couplet on the administration of government, stating “that a good government ill administered is injurious to every member of the community” (to John Thaxter, 26 October 1782). In encouraging her fourteen-year-old son to be virtuous, she reminded him that “an Honest Man is the Noblest work of God” (to John Quincy Adams, 21 January, 1781). She regularly cited Pope’s dictum that “Order is Heaven’s first law” whenever trying to explain perplexing matters. In denouncing clerical bigotry and intolerance she again cited Pope (to John Quincy Adams, 12 October 1815):

His can’t be wrong whose Life is in the Right.

In advocating kindness and good deeds, she usually cited Jesus: “Thou shalt love thy neighbor as thyself,” but she also cited Pope (to John Quincy Adams, 20 March 1780):

Remember man, the universal cause

Acts not by partial, but by general laws,

And makes what happiness we justly call,

Subsist not in the good of one, but all.

There’s not a blessing individuals find,

But some ways leans and harkens to the kind.