Throughout the colonial and Revolutionary eras, Rhode Island was the epitome of democracy. The legislature usually met for weekly sessions six times a year in five different towns within the tiny state. The state’s thirty towns held formal meetings on average nine times each year and regularly used the initiative and referendum. Rhode Island’s democratic proclivities often angered its neighbors. Such was the case when on three occasions in 1787 the legislature refused to send delegates to the Constitutional Convention, when it repeatedly refused in 1788 and 1789 to call a state ratifying convention, and when in 1788 it submitted the Constitution directly to the people in a referendum conducted in town meetings. Ironically, Rhode Island’s referendum was condemned as anti-democratic even though it was the only time in the ratification process that the people actually voted on the new Constitution that began “We the People.”

When it first considered the Constitution, the Rhode Island Assembly on 3 November ordered one thousand copies of the Constitution printed and distributed to the towns. However, the Assembly rejected a motion to call a state convention. When the legislature reconvened for its February 1788 session, Federalists demanded that a convention be called. On 29 February the lower house rejected a convention by a vote of 43 to 15. Antifederalist leaders then proposed that freemen vote individually in their towns on 24 March to accept or reject the Constitution.

Praising the measure as a democratic exercise in popular consent, A Rhode-Island Land Holder noted holding a referendum instead of a ratifying convention originated “from the purest motives of disinterested [unbiased] regard, for the real happiness and welfare of the State.” However, A Freeman asked “Is it possible that the freemen throughout the State can have had either leisure or opportunity to examine the proposed Constitution, so as to be competent to form an adequate judgment on this very momentous question?” As a result, he alleged these local gatherings would be unduly influenced by “artful and designing men” who would “circulate falsehood after falsehood.” 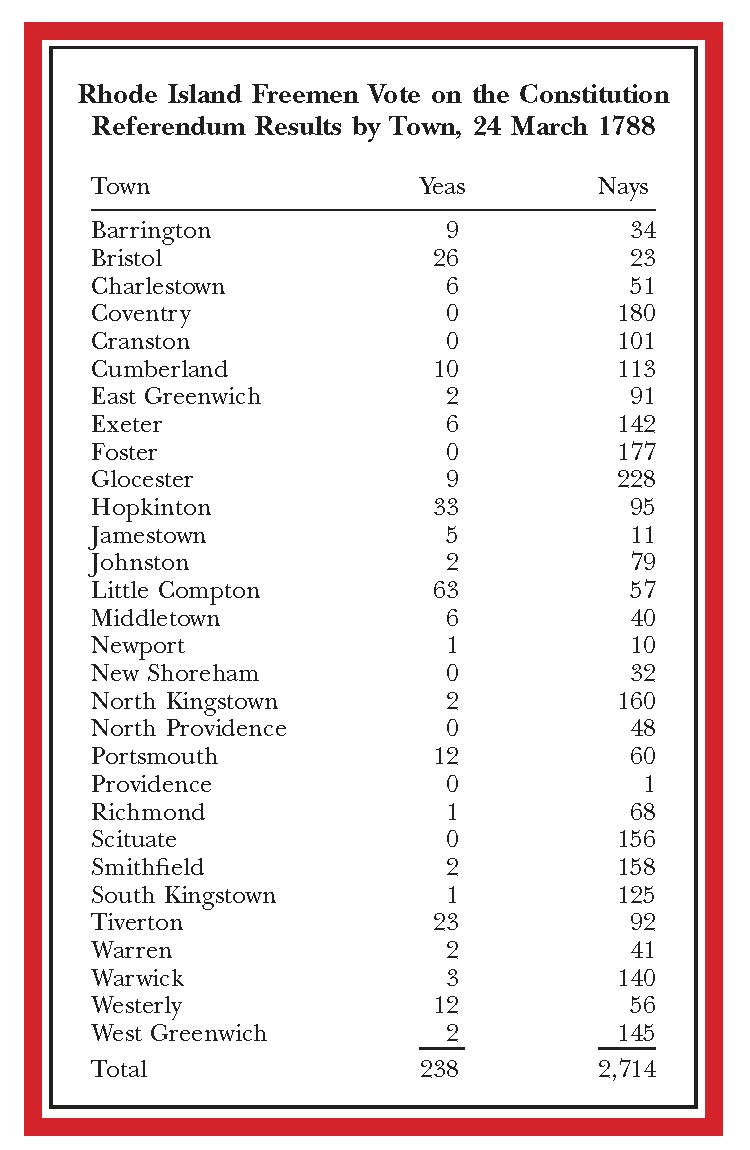 The referendum was held on 24 March 1788. Each freeman spoke out publicly and either signed a list or had his name recorded by the town clerk. Federalists throughout the state boycotted, casting no votes in seven towns, one vote in three towns, and two votes in six towns. In only two of the state’s thirty towns (Bristol and Little Compton) did a majority of those voting support the adoption of the Constitution. Each town submitted its list of voters to the legislature which appointed a committee to count the votes. In the final tabulation the Constitution was rejected by a vote of 2,714 to 238. The town of Newport instructed its Assembly deputies to call a state convention, and freemen in Bristol and Providence signed petitions to the Assembly asking that a state convention be called. On 5 April the legislature reported the results of the referendum to the president of the Confederation Congress.

Finally, in January 1790, the legislature called a state convention which met in March. Controlled by Antifederalists, the convention proposed that the twelve other states already operating under the new Constitution should adopt Rhode Island’s recommended amendments. The convention adjourned to meet in Newport where on 29 May 1790 it adopted the Constitution.