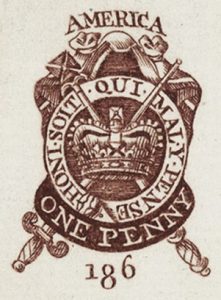 With the end of the French and Indian War in 1763, the British Parliament initiated a new imperial policy that so alienated its North American colonies that within little more than a decade they seceded from the British Empire and declared their own independence. The Stamp Act of 22 March 1765 was perhaps Parliament’s most obnoxious measure in the eyes of the colonists. As a direct tax, the act was intended to provide a revenue to help protect and administer the colonies. The act required a stamp to be affixed to various forms of paper (newspapers, pamphlets, and almanacs), legal documents (wills, bills of sale, and birth, death, and marriage certificates), playing cards, and dice. The stamps had to be purchased with British sterling—not colonial paper money, and violators could be tried without juries in vice admiralty courts away from their home colonies.

Even before its implementation on 1 November 1765, the Stamp Act aroused universal animosity throughout the colonies. Government officials were intimidated—some were hung in effigy, a few were tarred and feathered, and some of their houses were looted and burned. A sense of colonial unity inspired a network of opposition in the form of committees of correspondence and more militant Sons of Liberty. Colonial legislatures passed resolutions condemning the Stamp Act, addressed petitions to Parliament requesting its repeal, and sent delegates to a congress assembled in New York City in October 1765 that petitioned Parliament and the king to repeal the act and protect cherished rights of Englishmen.

Recognizing the counter-productivity of the act, British merchants and manufacturers as well as cautious politicians agreed that the act should be repealed. After a lengthy debate, Parliament repealed the act and the king approved the repeal on 18 March 1766. On the same day, the king approved Parliament’s Declaratory Act, which provided that the king, by and with the advice and consent of Parliament “had, hath, and of right ought to have, full power and authority to make laws and statutes of sufficient force and validity to bind the colonies and people of America, subjects of the Crown of Great Britain, in all cases whatsoever.” The act also asserted that all colonial acts, resolutions, votes, orders, and proceedings that questioned this power and authority were null and void.

At first, Americans celebrated the repeal of the Stamp Act, but they soon realized that the Declaratory Act presented new dangers when Parliament passed the Townshend duties in 1767. In December 1776, Thomas Paine in his first “American Crisis” essay wrote that “Britain, with an army to enforce her tyranny, has declared, that she has a right (not only to tax) but ‘to bind us in all cases whatsoever,’ and if being bound in that manner is not slavery, then is there not such a thing as slavery upon earth. Even the expression is impious, for so unlimited a power can belong only to God.”

With this loathing of imperial power, the Second Continental Congress proposed the Articles of Confederation that gave the future Congress only enumerated powers as well as no authority to implement its powers. Article II of the Articles specified that Congress would have only those powers that were “expressly” granted; all other powers were reserved to the states. Within a decade, however, most Americans realized the futility of the Articles. A Constitutional Convention was called to adjust the federal-state relationship by giving the federal government more powers.

The original resolutions accepted by the Constitutional Convention gave Congress general legislative powers. During the Convention’s recess in late July and early August, the Committee of Detail approved a list of enumerated powers followed by a clause granting Congress the necessary and proper power to implement its enumerated powers. No serious opposition to this clause occurred, although Pierce Butler of South Carolina proposed that Congress should “make all Laws, not repugnant to this Constitution that may be necessary for carrying into execution the foregoing powers.” No vote was recorded on Butler’s proposal and the original clause was unanimously approved by the state delegations on 20 August 1787. Late in August, George Mason of Virginia circulated among a few delegates a proposal calling for a number of changes one of which stated that “The Objects of the National Government to be expressly defined, instead of indefinite powers, under an arbitrary Construction of general Clauses.” This proposal, which would have in large measure re-established Article II of the Articles of Confederation, appears to have garnered little or no support. At the end of the Convention, each of the three non-signing delegates (Elbridge Gerry of Massachusetts and Mason and Edmund Randolph of Virginia) objected to the necessary and proper clause. On 15 September, Mason condemned the clause saying that it would allow Congress to “extend their power as far as they shall think proper; so that the State legislatures have no security for the powers now presumed to remain to them, or the people for their rights.”

The necessary and proper clause received considerable attention during the debate over the ratification of the new Constitution. Antifederalists referred to it as the “sweeping” or “omnipotent” clause, asserting that it would “stretch” Congress’ powers. They compared it to Parliament’s Declaratory Act, suggesting that nothing could “restrain the Congress from making such laws as they please.” There would be no limit to their authority, for they alone would judge what was necessary. Besides the powers enumerated by the Constitution, “other powers may be assumed hereafter as contained by implication in this constitution. The Congress shall judge of what is necessary and proper in all these cases and in all other cases—in short in all cases whatsoever,” If disputes arose as to the constitutionality of any congressional measure, the supremacy clause in Article VI would always allow federal courts to rule in favor of federal law.*

Federalists responded by saying that the real danger under the new Constitution would be that the state governments would “feel a disposition to curtail and evade the legitimate authorities of the Union,” thus sapping “the foundations of the Union.” To guard against this danger, the Convention thought “it necessary, in so cardinal a point, to leave nothing to construction.” Federalists readily acknowledged that federal legislation had to be supreme over state laws and constitutions. But the supremacy clause would only apply to federal laws “made in pursuance of the Constitution.” Federal laws not made in pursuance of the Constitution “will be merely acts of usurpation and will deserve to be treated as such.”**