In January 1967, while in New York City doing research on my master’s thesis, I tried out for Jeopardy! The popular morning TV game show, then hosted by Art Fleming, had originated in 1964. I found myself in a large room with about twenty other hopeful contestants. We all took an “IQ-like” exam and had our photographs taken individually with a Polaroid Land camera. Not having enough “audience appeal,” I was not selected as a contestant. Two decades later, however, much to my surprise, I received a telephone call from the producers of Jeopardy! asking me for assistance. Would I be an expert witness in a trial brought by a suit from a disgruntled contestant? I readily agreed to share my knowledge.

The issue in the case centered on the “Final Jeopardy” question. “In what order was the Constitution of 1787 signed?” All of the contestants incorrectly answered the question, but the disgruntled contestant argued that the answer provided by Jeopardy! was also incorrect. 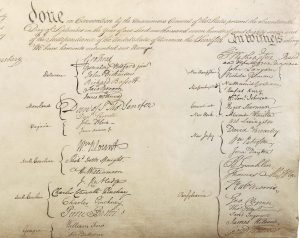 What is the correct answer? The delegates to the Constitutional Convention signed the engrossed Constitution by their state delegation in two columns on the fourth page following the signature of George Washington who signed as the Convention’s president and as a deputy from Virginia. Then, starting in the right-hand column, the delegates signed from north to south, beginning with New Hampshire and ending in the left-hand column with Georgia. Each column first listed the state name (in the handwriting of Alexander Hamilton) and then to the right connected by a brace, the delegates signed their names. (First Column: New Hampshire, Massachusetts, Connecticut, New York, New Jersey, and Pennsylvania; Second Column: Delaware, Maryland, Virginia, North Carolina, South Carolina, and Georgia). Rhode Island wasn’t included because it refused to send delegates to the Convention. The columns were reversed in the printed versions of the Constitution in newspapers, broadsides, and pamphlets.

On the last day of the Convention, an enfeebled eighty-one-year-old Benjamin Franklin had a fellow-Pennsylvania delegate (James Wilson) deliver his last speech that urged all of the delegates to sign the Constitution even though they might have some objections. At the end of the speech, Franklin suggested (and the Convention agreed) a “convenient form” for signing: “Done in Convention, by the unanimous consent of the States present the 17th of Sept. . . . In Witness whereof we have hereunto subscribed our names.” This ambiguous form had originally been drafted by Gouverneur Morris but “in order to gain the dissenting members, was put into the hands of Doctor Franklin that it might have the better chance of success.” Thirty-nine of the forty-two attending delegates signed the Constitution. (Actually, John Dickinson who left the Convention on 15 September due to ill health, asked his fellow Delawarean delegate George Read to sign for him.) Only three (Elbridge Gerry of Massachusetts and George Mason and Edmund Randolph of Virginia) refused to sign. But because the delegates were signing as witnesses for their home state’s approval, the signing could be viewed as the unanimous vote of the states in attendance. 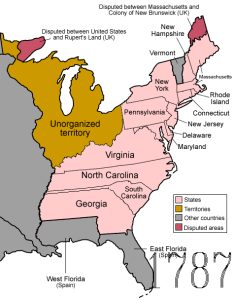 The disgruntled Jeopardy! contestant argued that north-to-south was technically incorrect in that Massachusetts (still in possession of Maine) was really north of New Hampshire while part of Pennsylvania is actually north of New Jersey and part of Virginia (i.e., part of West Virginia) was north of Maryland. Although true, these geographic anomalies didn’t seem to bother the Founding generation.

When Jeopardy! invited the contestant to appear on a new segment of the program, the suit was dropped and my services as an expert witness were no longer needed. Perhaps, they’ll contact me again if they ask how many delegates signed the Constitution.